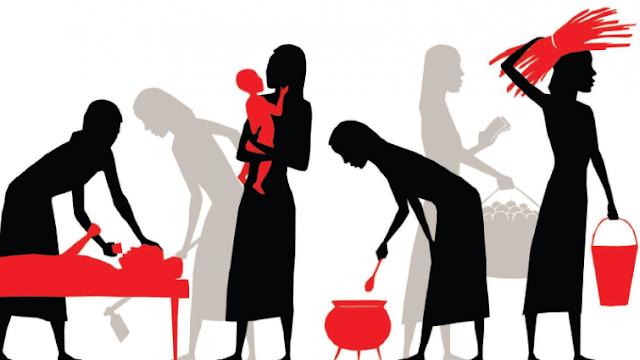 It’s in the news. From the Zuck to Elon Musk, dire warnings are being issued about the impact of technological unemployment on our society—unless we begin to implement some sort of universal basic income, or UBI. For those who are new to this concept, a basic income is defined on Wikipedia as:

I’ve written about this topic before, my first blog on UBI garnered more than 50,000 hits on Reddit at one time, and has since gone on to have thousands of reads on Medium and shares on Facebook & Twitter. I’ve seen this sort of success with UBI articles by other writers as well, this topic is obviously on everyone’s mind.

There are many excellent articles on the why, how and what all over the internet, but today I want to look at it from a feminist perspective—specifically from a mother’s perspective, and why UBI is so important for the raising of the next generation.

Before I start, let’s address all the “A woman is so much more than a mother!!!” shrieks out there. Yes, this is true, however 57% of American women between the ages of 15-50 are mothers, so the work that comes with caring for children is absolutely being done by the majority of females, on a daily basis, and very little of it is paid or even acknowledged as work.

The raising of children, as well as the work of caring for a home, is completely unseen by our society. This is obvious when you hear people bemoan the idea of a world without paid work as we’ve defined it. They say things like, “Without work, humans will go mad” or “What will people do with themselves if they don’t have jobs?” When I hear those statements, I know that the person making them has NEVER been a housewife, because they have no appreciation for the work of life.

What is the work of life? Let’s start with something we all have—a body. If you have one, then you will admit that to have a body means that life is work. You must clean it, feed it, clothe it, and shelter it. You should also exercise it and keep it flexible. This is the minimum amount of work that you do every day, just to care for yourself! In order to achieve the work of the body, most of us work for money to pay for food, clothing, shelter and health care. So automatically, we’re pulled into the employment system through necessity. But even before the modern industrial world, the majority of one’s life was spent procuring the things the body needs to stay alive.

Thus, we all have a body, and those of us who are fortunate, also have a shelter for that body, which also takes a lot of effort. Caring for and maintaining the home is definitely work, and either you make enough money to hire someone to do this for you, or you do it yourself, ON TOP of your paid employment.

Now, for the 57% of American women between the ages of 15-50, who also have children, multiply the work of the body times the work of the house and then raise it to the power of 10. Yes, children add that much more work to the equation. This work must be done, regardless if the mother is also employed in paid work.

Some women chose to stay-at-home to raise the kids and do all the householder chores. As a matter-of-fact, in 2014, that number rose to 29% from 23% in 1999. This is the first time in 20 years that number increased. Regardless of the whys of that choice, this means that of the 57% of women who are mothers, almost a third are providing childcare and home labor without any wages.

Even for the women who are working jobs outside of the home, the work of the home STILL EXISTS, they just do it instead of sleeping. They rush from work to daycare to get the kid, drive the kid around to after-school activities, grocery shop, cook dinner, help with homework, get the kids to bed, clean the house, do the laundry, pay the bills, go to bed way too late and then get up the next day to do it all again.

In a nutshell, the work of life is constant, mostly unpaid, and mostly done by women.

From the beginning, feminism has been trying to share this unpaid, yet entirely unavoidable, workload with our male counterparts, and this is absolutely the right idea. However, it does nothing to address the fact that even shared, this crucial work is happening every day and is unaccounted for as work in the “real” world. None of this work can be left undone, if it is ignored, society will pay for it in social ills. Yet women (and the men who share caregiving with them) are not compensated in any way. Worse, this work isn’t even included in the 40 hour work week that we all revere as the holy standard of honest employment. It’s as if any of the work it takes to care for our bodies, our physical homes, and of course the bodies of our children, isn’t real. Listen to an economist or our politicians talk, and you’d think we’re all Samantha from Bewitched, wiggling our noses and taking care of the home in an instant.

Many of our families are struggling to balance work and family, and it has become nearly impossible for a single income family to even rent a two-bedroom apartment. Even dual employment at the median wage won’t buy a home in most marketplaces. There are real issues when our children are left behind for the almighty dollar, and a universal basic income could help relieve some of the stress that families face when it comes to parenting.

Imagine, if when a woman started her family, she knew her food and shelter were guaranteed? Now she can choose to work out of the home based on her ability to manage the needs of her family, home and her career, not merely to keep the roof over her kids’ heads.

Imagine, if a woman finds herself in an abusive relationship, she could leave her husband knowing that she will be able to provide the basics for her children, no matter what?

Imagine, if a woman is faced with a very sick child, could take time off to help that child heal and address the medical issues, without fear of losing her home?

Imagine, if a woman finds herself truly desiring to stay home to raise her children, she has the means to do so because society honors the work of the home?

Imagine, if a woman loses her partner, and finds herself alone but without worry at this time of crisis because her home is guaranteed and thus her children are safe?

Imagine, if a man finds himself without his wife, he can continue to raise his children without the fear of losing his home?

Imagine, if a young woman finds herself unexpectedly pregnant and not entirely prepared, she is able to face it without shame or fear of providing for the child, even if she chooses to go at it alone?

Imagine, if a young man in the same situation can offer to raise his child and care for it, even if that means going at it alone?

Can you even imagine a world where caring for others isn’t seen as a burden?

For too long, feminism has turned its head away from mothers and the real work of raising a family, pretending that it doesn’t matter, or change a thing when it comes to success in our economic story. This is a mistake, for in shaming what society has called, “women’s work” we join the misogyny of our world. We pretend that this model of success, aimed only at personal wealth and power, is actually healthy, denying the fact that others do indeed need to be cared for. Those in power have been scorning and taking advantage of caregivers since the dawn of the industrial age and feminism should fight this, not enable it.

If your efforts don’t produce profit, they’re meaningless—this is our economic world, and it’s tearing us apart.

Perhaps it’s this very misogyny that makes welfare and social services so distasteful to a large percent of Americans? Perhaps this disdain for caregiving, and the women who do it, is the real reason UBI is seen as the ultimate handout, or a failure to take care of yourself, because should we implement it, the first people to take advantage of it will be the 57% of women who are mothers, already working hours a day, seven days a week, for no wage at all.

Sometimes we have to take care of caregivers so that they can take care of their kids. Is this such a bad thing? Is this a sexist thing? Or is it just a natural part of our human existence that some of us need to be cared for and others of us are called to do that caring?

What is the point of being human if the only work that is revered is the work that has nothing to do with caring and only with consuming?

While it’s important to continue to share caregiving between men and women, it’s also important to create a society where caregiving is not a liability, but rather an act of service that we all appreciate. Even if you aren’t a parent, you have benefitted from caregiving, otherwise you wouldn't be here. Honestly, it takes more than a Hallmark holiday every year to show our appreciation. Creating a world where UBI is our foundation would go a lot further towards equality between the sexes, for in doing so we acknowledge that the work of the home is real, and we free women from the economic constraints that childrearing has come to bear upon us, much more than our male counterparts.

Universal basic income as a part of the feminist agenda only makes sense. Think of  it, what if in addition to fighting for education and the right to work and income equality, we also fought for a living wage when it comes to the work of life, thus freeing childcare and mothering from the misogyny that has disdained it for far too long? Many men are fighting for UBI as a means to save themselves from a wage-less future--what have women, many of whom have been wage-less workers for decades, been waiting for?