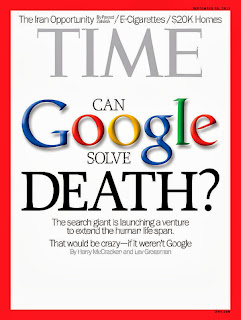 I'm always drawn to the magazines at the check out line. Even though I'm supposed to be paying attention and unloading my cart, I find myself drifting from the effort needed to be a good customer and into the cover stories. From the trite Hollywood and political rag mags, to the few "news" periodicals and the occasional self help issue thrown in for good measure, I'm helpless to the call of the headlines.  So imagine how hard it was for me, a post-singularity sci-fi writer, to continue with my checkout line duties when Time Magazine asked, "Can Google Solve Death?" I almost answered out loud, "Really now. Is death something to be solved?" At that point the cashier asked me to please unload the rest of my cart. Before I complied with his request, I quickly pulled the September 30, 2013 edition from the rack and threw it in with the rest of my groceries.

Devouring the well written and insightful article, I learned that Larry Page, CEO and co-founder of Google, is interested in solving the death element of the human story. He sees death as something that we ought to fix and figure out, and he's willing to shell out a ton of money investing in research that will bring us a new humanity – one where death's been forgotten and we’re free to live forever and ever, as ourselves. Which led me to ask first, "What might that self look like?"

In a culture obsessed with the body, one can only imagine. No one wants to live forever in an old body, thus any aging solution that Google's new company, Calico, comes up with will need to be attractive. I mean, after all, if they're going to solve death, perhaps they can solve the whole getting old and gray thing first. And ridding humanity of the obesity epidemic might be nice as well. Living forever in a broken down body doesn't seem like much of a party to me. Thus Calico will have to focus much of their efforts in preserving and maintaining the perfect body, so that it lives in a state of health, without aging. That's the immortality of dreams and fantasies. (Note: The eHumans in my novel are only one of many potential paths that could be taken here.)

But my next question was, "Why Google?" Why would the search engine giant pursue this particular effort? What do they have that will make their quest to solve death successful? And how will Google and their investors ever make any money from such a venture? Calico won't be the first company to pursue the fountain of youth; Much time, money and effort has already gone into this subject. Humanity has been obsessed with living forever since the dawn of time. But I have a few guesses as to why this company in particular might be interested in being the one to finally solve this elusive issue.

Studies have recently suggested that aging is caused by a gene in our DNA. Perhaps research at Calico will take a look at this, and begin to compile the work that's already been done in this area. The Genome project revealed that human DNA is a huge, elegant data sequence, one in which only three percent has been decoded. The rest, called "junk,"  is essentially a data puzzle of enormous proportions. Could the de-activation of the aging gene possibly be uncovered in this jumble of "junk" DNA? Parsing such a vast amount of data requires an innovative search algorithm. Which is just the thing Google is known for, and is why it makes sense for the company to be the one to solve death. They alone have the ability to parse the data already documented on the subject. They've already designed the data algorithms necessary to sift, search and refine questions and queries.

Google is also the leader in data acquisition, both their Gmail and Google Cloud businesses have millions of users. In addition, in 2003, they launched Google Books. This business eventually folded, due to litigation by publishers and authors, but the effort did manage to allow Google to collect a ton of older and out of print texts, where early research and opinions on death and dying may reside. To discover what the ancients believed, and where modern science intersects, just might bring us closer to discovering how to disable the aging gene within our very DNA.

That would be one very exciting Google Search. A true gift of health to humanity.

Yet there's another thing to consider in this discussion. What if the gene can't be disabled organically? What if the solution resides in a machine answer? Like an implant, something that prolongs life by secreting chemicals, or nanobots, into the bloodstream, at a rate specific for each human being. It could use personal health data and vital statistics stored on the implant to determine basic patient information such as blood pressure, DNA sequencing, and white blood cell count, to monitor the situation and make changes in the dosages as needed. This isn't out of Google's scope. The company has been interested in personal medical data for a while, launching Google Health in 2008. Interestingly, the effort failed, mostly because consumers didn't trust it.

Hmm…I wonder, why didn't consumers trust their health records to be stored online?

Let's consider the immortality implant again. What else could be stored in this life-enhancing device? What else could the device be used for? Such an implant would be very desirable to many, many people. So desirable that Google could find themselves with billions of users and thus become the owners of more data about humanity than ever before. The day we become devices on the network is the day that the network has humanity in the palm of its hand.

The race then isn't about who will solve death first. The race is who will own the network, and the application that drives everyone to become a device on the network, first.

Google as a company has been very clear that parsing their Gmail customer's emails is not a privacy violation. Their customers are data sets and agree to this when they sign on. If Calico discovers the perfect implant that overrides our very DNA in order to prolong our lives, who would turn that down? My guess is not too many. Most humans don't wish to die. That's a lot of potential customers, and a lot of data for Google to parse, use, and sell. It's this data that could make Google's investment in Calico worth pursuing.

The question we must begin to consider is this – Is immortality worth becoming a data set?

And if it isn't, if being nothing more than a data set is unsettling, then severing the ties with Google, or any company for that matter, after receiving an immortality implant won't be as easy as switching from Gmail to Hushmail, or using a different search engine on the web. Severing the ties in this way will mean removing the very implant that keeps you young and healthy, even at one hundred years old.

Choosing to die is never an easy thing.

And Big Business knows this. Which is why investing in technological singularity solutions looks very profitable indeed.

I Finally Got Helped  !! I'm so excited right now, I just have to share my testimony on this Forum.. The feeling of being loved takes away so much burden from our shoulders. I had all this but I made a big mistake when I cheated on my wife with another woman  and my wife left me for over 4 months after she found out..  I was lonely, sad and devastated. Luckily I was directed to a very powerful spell caster Dr Emu who helped me cast a spell of reconciliation on our Relationship and he brought back my wife and now she loves me far more than ever.. I'm so happy with life now. Thank you so much Dr Emu, kindly Contact  Dr Emu Today and get any kind of help you want.. Via Email emutemple@gmail.com or Call/WhatsApp cell number  +2347012841542 Website (https://emutemple.wordpress.com/)