A New Series, A New Beginning 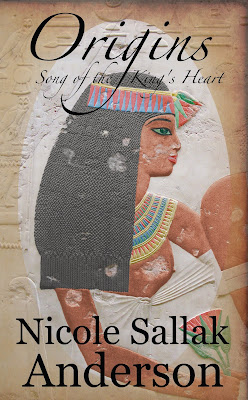 This is the lost story of Lord Ankhwenefer, known to the Greeks as Chaonnophris the Rebel, the last native Egyptian Pharaoh. The brilliance and heartache of his rebellion weave
a tale that history has forgotten.

I wish I had a formula that was more exact, but I don’t. I’ve written six novels, and the only thing they’ve had in common is that with each telling, I’ve improved as a writer. Yes, there’s a research phase, a brainstorming phase, an execution phase and then a publication phase. But what happens within those phases is up to the author and the story that wishes to be told. And that is the biggest difference between my writing in 2011 and my writing now—in 2011 I wrote stories that I wanted to tell, what I’m about to release to the world in 2019 is a story that wanted to be told.

In 2014, while researching rebellions in general, I stumbled upon a Wikipedia entry about the Great Egyptian Revolt of 200 B.C.E. It was at most four sentences long and mentioned two men, Horwenefer, who launched the civil war against the Macedonian Ptolemaic Empire in 205 B.C.E, and his successor, Ankhwenefer, who held the Upper Kingdom, approximately 80% of Ancient Egypt, until 186 B.C.E.

This entry intrigued me because I’d forgotten that the most famous last Egyptian Pharaoh, Cleopatra VII, was NOT Egyptian, she was Macedonian, and the last of the Ptolemies to rule. What followed for me was deepening interest in Ancient Egypt, many strange coincidences, books literally falling off shelves to be read, and about a year spent ruminating on this Pharaoh named Ankhwenefer and his forgotten place in history.

In the fall of 2015, I sat down to write my third eHuman novel, a story I wanted to tell. Instead, a Pharaoh came to me and insisted I write his story instead. Trying something new, I listened to the muse, and thus began the greatest adventure of my writing so far. Diving into Ancient Egypt is to visit an entirely different world, rich with custom, ritual, religion, architecture, and characters so interesting, I had a hard time keeping track of who was “real” and who was imaginary. One of the few facts we know about Ankhwenefer is that he was arrested in 186 B.C.E. by a Macedonian general, and afterward, Ptolemy V spent two years chiseling his name from every surface in southern Egypt. Everything he’d built or written was destroyed. His name lived on only in journals and records of merchants, tax collectors and slave owners as they documented their woes during the time of the "Rebel King." While his actual history is lacking in primary resources, I had carte blanche when it came to creating this tale.

Four years after I sat down to write his story for the modern age, I’m proud to announce that the first book, Origins, will be released October 1, 2019 by Literary Wanderlust.

People follow me on social media for different reasons. My Facebook friends tend to be readers of the eHuman novels. Twitter is a blend of readers and those interested in my work in universal basic income and technology. My Medium followers are mostly those dropping in for modern musings on the state of the world—from politics, to technology, to modern parenting. If you’ve enjoyed any of my writing on any platform, I ask you to give The Song of the King’s Heart Trilogy a try. Why? First of all, I wrote the first draft of all three novels in one go. This means that if you like the first one, you won’t have to wait decades (ahem) to see how it ends. The second book, Blood and Chaos, is about to go into the production queue as we speak and the final book, Civilization’s End, has just been given to my editor. The goal is to release an installment each year, starting this fall. A second reason is that Egypt is overdue for a revival. There is a majesty waiting to be unearthed in our imaginations, a civilization that lasted over 4,000 years in perpetuity. That’s about four times longer than Rome, and there’s a reason for their lengthy success. The Song of the King’s Heart may be the story of how their era ended but remembering their culture can inspire us to live with more beauty, love, and art in our lives. We can learn from a civilization that believed that all are one, that words have power, and that living in accordance with nature can advance humanity.

Interested? Origins will be released worldwide on 10/1/19, but you can preorder a Kindle or print copy on Amazon or my publisher, Literary Wanderlust. Preorders create excitement on Amazon and drive the novel's placement in their searches. Want to read it sooner? I have ARCs, both digital and print, for free to anyone willing to give an honest review on Amazon and/or Goodreads before the book comes out. Message me @NSallakAnderson on Twitter, FB, or Instagram, and I’ll be in touch.

Releasing a novel is a strange mixture of anguish and ecstasy. On one hand, it feels like Christmas Eve and I can’t wait until the big day. On the other hand, I’m like a parent dropping my kid off at his first day of preschool. How will he be received with the other children? Will he be cared for? What will the teacher think? It’s quite uncomfortable, but can’t be avoided, as any writer can attest. When a story wants to be told, it will haunt you until you do so. All the rejection, anxiety, and insecurity are nothing compared to the emptiness of living with a story untold.

As always, I’m grateful for your time and attention. Writers need readers and I hope readers will enjoy the story of Lord Ankhwenefer, Good Being of Isis and Rebel King...the last native Pharaoh of Ancient Egypt.